"Saint Patroclus (Patroccus; French: Parre, German: Patroklus) of Troyes was a Christian martyr who died around 259 AD. A wealthy native of Troyes, he was noted for his charity.

Highly venerated after the discovery of his Acts, Patroclus is said to have been arrested during the persecutions of the Emperor Aurelian. He is said to have converted Sabinian of Troyes.

His persecutors attempted to drown him in the River Seine, but Patroclus managed to briefly escape. However, he was recaptured and beheaded at Troyes. The name of the church (Troyes) is named after the Ancient Greek city of Troy" - (en.wikipedia.org 31.01.2020) 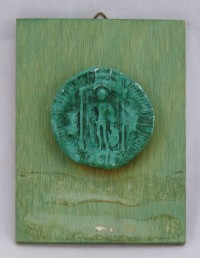