"Septimius Severus (/səˈvɪərəs/ sə-VEER-əs; Latin: Lucius Septimius Severus Augustus;[a] 11 April 145 – 4 February 211), also known as Severus, was Roman emperor from 193 to 211. He was born in Leptis Magna in the Roman province of Africa. As a young man he advanced through the customary succession of offices under the reigns of Marcus Aurelius and Commodus. Severus seized power after the death of Emperor Pertinax in 193 during the Year of the Five Emperors.

After deposing and killing the incumbent emperor Didius Julianus, Severus fought his rival claimants, the Roman generals Pescennius Niger and Clodius Albinus. Niger was defeated in 194 at the Battle of Issus in Cilicia. Later that year Severus waged a short punitive campaign beyond the eastern frontier, annexing the Kingdom of Osroene as a new province. Severus defeated Albinus three years later at the Battle of Lugdunum in Gaul." - (en.wikipedia.org 08.11.2019) 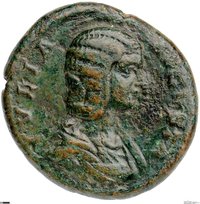 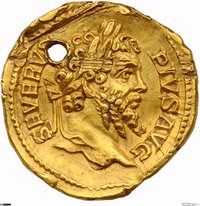 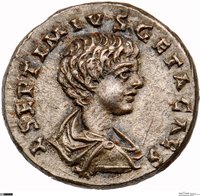