"A cephalopod (/ˈsɛfələpɒd, ˈkɛf-/) is any member of the molluscan class Cephalopoda (Greek plural κεφαλόποδα, kephalópoda; "head-feet"[citation needed]) such as a squid, octopus, or nautilus. These exclusively marine animals are characterized by bilateral body symmetry, a prominent head, and a set of arms or tentacles (muscular hydrostats) modified from the primitive molluscan foot. Fishermen sometimes call them inkfish, referring to their common ability to squirt ink. The study of cephalopods is a branch of malacology known as teuthology.

Cephalopods became dominant during the Ordovician period, represented by primitive nautiloids. The class now contains two, only distantly related, extant subclasses: Coleoidea, which includes octopuses, squid, and cuttlefish; and Nautiloidea, represented by Nautilus and Allonautilus. In the Coleoidea, the molluscan shell has been internalized or is absent, whereas in the Nautiloidea, the external shell remains. About 800 living species of cephalopods have been identified. Two important extinct taxa are the Ammonoidea (ammonites) and Belemnoidea (belemnites)." - (en.wikipedia.org 03.10.2019) 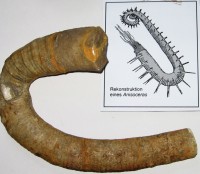